Aerial applicators have all of the challenges of managing pesticide drift as other applicators do, but they also deal with a release (boom) height of anywhere between 8 and 12 feet. This gives the effects of wind and carrier evaporation additional time to affect the droplet. Aerial applicators may need to adjust droplet size as the temperature, humidity, and wind change throughout the day.

Every plane must be set up individually. Even similar planes may require very different setups to provide optimum patterns. The best way to learn how changes affect the plane is to participate in a Professional Application Analysis Clinic sanctioned by the National Agricultural Aviation Association. Consult Operation SAFE and contact one of the SAFE analysts in a nearby location. Participation in an approved pattern-testing clinic is critical to determining how various adjustments affect the plane’s application performance and drift potential. 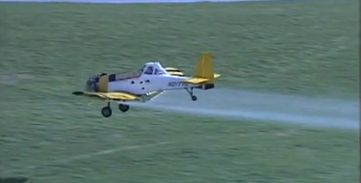 To reduce the probability of smaller droplets being caught up in the wing vortices, general recommendations for fixed-wing aircraft suggest that boom width not exceed 75% of wingspan. Boom widths of 65 to 70% may be necessary on some planes to minimize the effect of vortices. Rotary wing aircraft can also have a vortex effect, and boom widths should be restricted to no more than 80% of the rotor width.

Whenever possible, reduce the amount of turbulence in the area where the droplets are released. This may be done, for example, by dropping the boom below the trailing edge of the wing, moving or shielding obstacles such as flow monitors and piping, and using nozzle drop tubes under the fuselage. Also, look for bent boom hangers or blunt surfaces that may cause air turbulence.

Application height also depends upon the plane but is usually from 8 to 12 feet. Generally smaller planes fly lower, and larger planes should stay higher. Heights that are too high increase the opportunity for wind and evaporation to affect the droplet. Flying too low may push the pattern outward, due to ground effect, and increase drift potential.

Closely follow the nozzle manufacturer’s recommendations for setting up nozzles.  To reduce fine droplets, nozzles generally should be pointed parallel with the airflow.  Be sure that the nozzles are parallel in flight, and not while sitting on the runway.  Use the bottom of the wing to gauge airflow.

Many Things to Consider

Many factors can influence drift during aerial application. Consider all the following, adjust where possible, and wait for appropriate conditions.