As a general rule, insecticides are more toxic to honey bees than fungicides and herbicides, but most insecticides can be applied to crops with little or no hazard to bees. However, because honey bees are insects, they are highly sensitive to several types of insecticides and it is important to follow all label precautions.

Most poisonings occur when BEE-TOXIC INSECTICIDES (explained below) are APPLIED to crops during the BLOOMING PERIOD. Poisoning of pollinators can ALSO result from:

The U.S. Environmental Protection Agency (EPA) evaluates a pesticide for toxicity to pollinators if it is used outdoors. A pesticide’s toxicity to bees is measured by:

Studies required by EPA to assess a pesticide’s toxicity 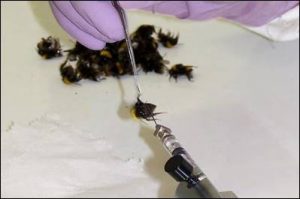 The initial, and still integral, toxicity test is the adult honey bee acute contact study. This lab study determines the amount of pesticide that kills 50% of a test group of bees, or LD50. (LD=Lethal Dose).

Toxicity Groups I and II are “bee-toxic pesticides” and the label will have specific use instructions to reduce the risk to pollinators (see Read and Follow the Label). A bee-toxic pesticide that does not have extended residual toxicity (next paragraph) can often be applied after pollinator foraging is complete (such as in the early evening) without harming pollinators that arrive the following day.

The toxicity of residues on foliage study determines the amount of time that pesticide residues on leaves (foliage) remain toxic to honey bees. The pesticide is applied to crop foliage–the foliage is harvested at predetermined post-application intervals–and test adult bees are confined on foliage with aged residues for 24 hours. Three treatment intervals (different durations of time that residues are aged between application and harvest) are typically used (e.g., 3, 8, and 24 hours post-application). If the mortality of bees exposed to the foliage harvested 24 hours after the application is greater than 25%, bees should continue to be exposed to aged residues on foliage samples collected every 24 hours (i.e., 48, 72, 96 hours, etc. after the application) until mortality is 25% or less. From these data, the number of hours (post-treatment) that the residue remains toxic to 25% of the bee population (RT25) is determined. It is believed that 25% of the colony can be lost and the colony can regenerate. Therefore, bee-toxic pesticides with RT25 values lower than 8 hours present a minimal hazard if they are applied during late evening or night–the residue degrades over time to less toxic compounds before bees visit the treated area/crop in the morning. Pesticides with RT25 values greater than 8 hours have Extended Residual Toxicity (ERT) that require somewhat different or additional protective measures.

EPA has compiled data of RT25 values for various active ingredients. It is not available for all pesticides. (Systemic pesticides are not considered in RT25 assessments; it is based solely on surface contact and exposure.) 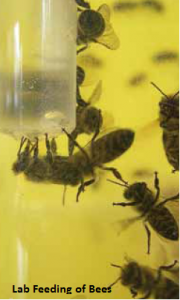 EPA’s current risk assessment guidance provides a more comprehensive framework for evaluating pesticide risk to bees and is based on many more studies compared with the two tests described above. Additional studies evaluate different life stages (adults and larvae/brood), exposure durations (acute and chronic), and routes of exposure (contact and ingestion/oral). Data required under this framework arise from three tiers of studies:

The EPA considers this new policy another step forward in protecting bees from possible adverse effects of pesticides. For more details, read the document entitled Process for Requiring Exposure and Effects Testing for Assessing Risks to Bees during Registration and Registration Review.

The Pesticide Toxicity to Bees “Traffic Light”  is a helpful guide that categorizes various pesticide products by their relative toxicity to honey bees.

John W. Allran reviewed and contributed to this page. He was the Environmental Toxicologist with the NC Dept. of Ag. & Consumer Services, Structural Pest Control & Pesticides Division and now works with the U.S. Environmental Protection Agency.