The repeated use of virtually any insecticide is capable of selecting for resistance in insects. With the introduction of every new insecticide class, cases of resistance surfaced within two to 20 years. The speed at which a species develops resistance to an insecticide depends on many factors. However, history clearly shows that the potential for resistance to develop and spread is heightened under the following conditions: 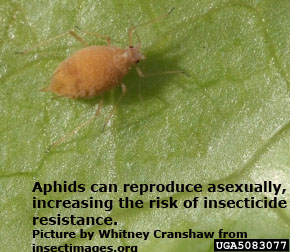 When insecticides are used under these conditions, it is imperative to treat alternate generations of pests with pesticides that have different modes of action or a non-chemical tactic.