The “Swiss cheese” model below depicts a PAMS approach for mouse control. (Note: you may use different tactics so don’t view this as standard practice.) The first two slices represent prevention tactics such as: 1.) sealing holes or cracks (¼ in. or larger) to exclude mice from buildings, or 2.) installing brush-type door sweeps that block the gap between the threshold and door base. The two avoidance slices focus on making an area unattractive for mice, examples include: 1.) not allowing trash to accumulate directly outside the building, or 2.) moving trash bins further away from entrances. Regularly monitor areas mice are known to infest such as kitchens and pantries for signs of their presence (e.g., fecal pellets, seed and insect carcasses).  Commercial pest managers may use non-toxic detection bait blocks or detect signs of gnawing on cardboard boxes.  Snap traps, a common suppression tool, may be used for monitoring as well–catching one mouse may indicate that there are more. If further action is needed, suppression tactics such as an adequate number and arrangement of traps (e.g., twelve traps for 2-3 mice is not too many) should be used. 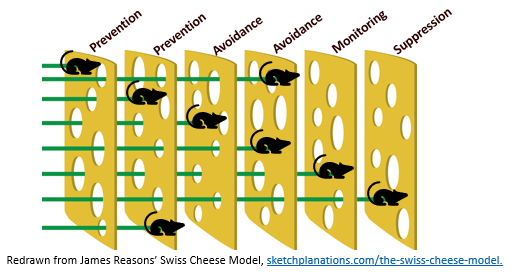 Use the entire PAMS approach as a tool to prevent or reduce conflicts caused by wildlife, rather than relying solely on trapping or elimination. Depending on the situation, preventative and avoidance measures may be sufficient. Success from the use of any one tactic, or single PAMS category of tactics, is never guaranteed, but their integration helps ensure the best results. Actions that should be considered within each PAMS category are described below.

WCOs or homeowners must correctly identify common wildlife species and the associated damage they may cause, including an awareness of the types of wildlife that may be potential pests in an area. Once you have identified the species, you must determine if the species is regulated, protected, or unprotected (see Laws Concerning Wildlife Damage). In addition, knowing the target species will reveal important biological features such as feeding habits, behaviors, and population dynamics (e.g., biological and cultural carrying capacity).