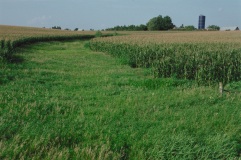 Grassed waterway— a natural or constructed vegetated channel that is shaped and graded to carry surface water at a non-erosive velocity to a stable outlet. Because of the concentrated flow that normally occurs in waterways, sediment trapping and water infiltration can be minimal with large runoff events, but substantial with smaller events. Waterways are most effective in trapping sediment and dissolved chemicals when designed to spread concentrated water flow over a vegetated filter adjacent to streams. 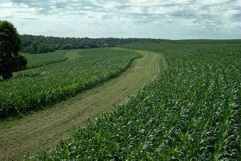 Contour buffer strips— strips of perennial vegetation alternated with wider cultivated strips that are farmed on the contour. Buffers are most effective in trapping pesticides when runoff enters uniformly as sheet-flow. Contour buffer strips are one of the most effective buffers to trap pesticides. There is less chance for concentrated flow and smaller areas of cultivated field deliver runoff directly to each strip within a relatively short distance compared to some edge-of-field buffers. 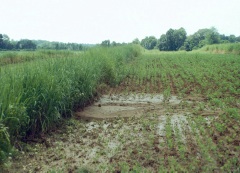 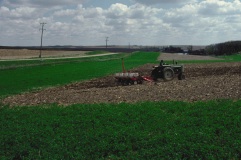 Field borders— a band or strip of perennial vegetation established on the edge of a cropland field. This buffer reduces pesticide runoff only when runoff flows over the strip. Even when no water flows over the strip, some water quality benefit may be gained because spraying operations are physically separated from adjacent areas, reducing drift and direct application to riparian areas 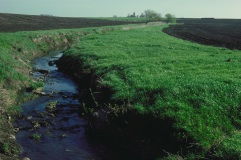 Filter strips— areas of grass or other permanent vegetation used to reduce sediment, organics, nutrients, pesticides, and other contaminants in runoff and to maintain or improve water quality. Filter strips are located between crop fields and water bodies. More pesticides can be removed by encouraging as much sheet-flow as possible across the strip and minimizing concentrated flow. This may be accomplished by combining filter strips with other conservation practices that control concentrated flow, such as vegetative barriers, level spreaders, or water bars. 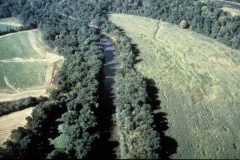 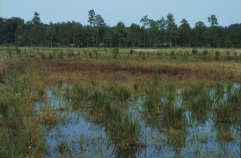