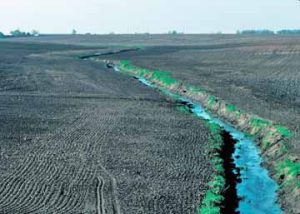 is the movement of contaminants, such as water-soluble pesticides or fertilizers, carried by water downward through permeable soils. Generally speaking, most pesticides adsorb to soil particles (especially clay), become immobile, and do not leach. The fate of mobile pesticides, however, can be thought of as a race between the various degradation processes and leaching to groundwater.

In contrast to surface water, groundwater does not continually dilute the contaminants that reach it. Flushing a plume of contamination from groundwater may take many years. The cold temperatures, limited microbiological activity, lack of sunlight, and low oxygen levels that are found deep beneath the soil surface, slow chemical breakdown. The result is that there is very little if any, breakdown of pesticides once they reach an aquifer. 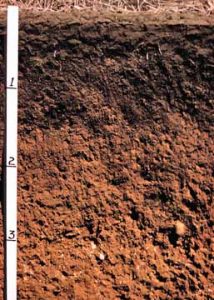 Soil texture: The proportions of sand, silt, and clay affect the movement of water through the soil. Coarse-textured soils containing more sand particles have large pores and are highly permeable, allowing water to move through rapidly. Pesticides carried by water through coarse-textured soil are more likely to reach and contaminate groundwater. Clay-textured soils have low permeability. A soil containing large proportions of clay holds more water and adsorbs more chemicals from the water. This slows the downward movement of chemicals, helps increase the chance of degradation and adsorption to soil particles, and reduces the chance of groundwater contamination.

Structure: Loosely packed soil particles allow speedy movement of water through the soil. Tightly compacted soil holds water back like a dam, not allowing water to move freely through it. There are several ways that openings and channels can be created for water movement. For example, burrows dug by mammals and earthworms create openings for water to move. Freezing and thawing creates fissures or cracks in soil and rock, breaking up compacted particles. Plant roots penetrate the soil, creating excellent water channels when they die and rot away. These openings and channels may permit relatively rapid water movement, even through, some clay soils.

Soil Water Content: The amount of water already in the soil has a direct bearing on whether rain or irrigation results in the recharging of groundwater and possible leaching of pesticides into the aquifer. Soluble chemicals are more likely to reach groundwater when soil water content approaches or is at saturation. Saturation is typical in the spring when rain and snowmelt occur. On the other hand, when soils are dry, the added water just fills the pores in the soil near the soil surface, making it unlikely that the water will reach the groundwater supply.

Changes in the depth to groundwater are normal. The water table is usually higher during the spring and autumn when rain is frequent, and lower during the summer. In the summer, the active water uptake by plants, high evaporation rate, and large amounts of water being pumped from wells may lower the water table.

The Type of Bedrock: In addition to soil characteristics, the region’s bedrock is another geological characteristic that has an important effect on the flow of recharge water and groundwater. Bedrock refers to the foundational layer beneath soil or rock fragments. The type of bedrock gives important clues to the fate of water. For example, limestone bedrock tends to have large channels from the surface to groundwater, allowing water to pass through quickly. Limestone close to the surface may allow quick passage of recharge water, reducing the chance for adsorption or degradation of chemicals to occur. Limestone also dissolves in water, creating underground passages and caves which let water move out of the area rapidly, possibly carrying chemicals long distances.

Slope: The topography of an area affects the speed with which water flows across the Earth’s surface. Steep slopes promote fast surface runoff and reduced chances for water to infiltrate into the ground. In valleys and flat areas, water flows more slowly across the surface, allowing more time for it to seep into the soil.

More Information on Pesticides in Groundwater