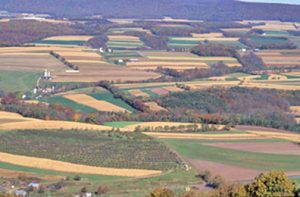 Runoff is the movement of water and any contaminants across the soil surface. It occurs when irrigation, rain or snow melt adds water to a surface faster than it can enter the soil. Water running off the land towards canals, streams, rivers, and lakes can also move chemicals, such as pesticides and fertilizers. Pesticides may be moving with the runoff water if dissolved in the water or adsorbed to eroding soil particles. How much a pesticide will move from the area where it was applied depends on a complex interaction of pesticide and soil properties with weather conditions and site characteristics.

Soil moisture content: Soil moisture content is a significant factor in determining how much runoff will occur from a site. Moist soils are more prone to runoff losses than drier soils.
Soil texture: Soils that contain clay, and are compacted, are much more prone to runoff losses than sandy soils. Dry sandy soils that are not compacted, are not likely to have pesticides runoff the site with heavy rainfall. 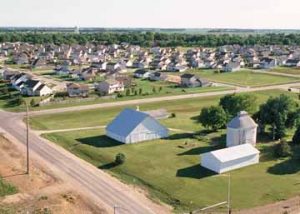 Weather or irrigation: Pesticide runoff will be greatest when heavy rain follows soon after a pesticide application. Over-irrigation could also lead to an accumulation of excess surface water and result in runoff. Runoff can also happen if a pesticide is applied to saturated soil, followed by light rain or additional irrigation. Frozen soils enhance the opportunity for pesticide runoff and can approach 100 percent; therefore, pesticides should never be applied to frozen soils.

Slope: The slope or grade of the site contributes to runoff. The more the ground slopes, the more likely water will runoff the site. On side-hill, and sloped ground contour planting, strip cropping, and buffer strips will reduce runoff.

Vegetation: The amount and type of vegetation on a site will affect runoff. Conservation tillage or reduced-tillage cropping systems leave ample vegetation or crop residue that slows the movement of runoff water and will keep the pesticide on site. Dense grass cover greatly reduces the potential for runoff losses of pesticides from lawns and buffer zones. 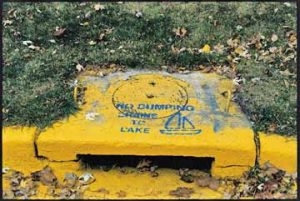 The physical and chemical properties of a pesticide are good indicators of potential runoff losses. The only way to know if the product you are using is vulnerable to runoff or leaching is to read the Environmental Hazards section on the pesticide label. Manufacturers must assess the properties of their products related to solubility, adsorption, and persistence, and state the appropriate precautions on the label.

Solubility: Highly soluble pesticides are more likely to be “picked up” by running water, and washed off the treated site. Most pesticides have low water solubility and do not dissolve enough to significantly contaminate runoff water in the dissolved state.

Adsorbency: Pesticides that strongly adsorb to soil particles will stay on the treated site as long as the soil remains. However, pesticides could be moved on soil particles if the soil is eroded by wind or heavy rain.

Pesticide persistence: The persistence of a pesticide plays a role in pesticide runoff; the faster it degrades, the less it is available to move with runoff water.

Pesticide application method: Pesticides that are incorporated, or injected, stay on-site and are not moved by heavy rainfall via runoff.