When selected and used appropriately, purifying elements for air-purifying respirators and gas masks remove specific contaminants from the air passing through them. The pesticide label specifies the purifying element(s) for you to use based on the anticipated hazard and phase of the pesticide that will be present in your breathing zone.

Elements that remove solids or liquids suspended in the air are called particulate filters; while vapor and gas removing elements are called either chemical cartridges or canisters. “Gas mask” refers to a full-facepiece, air-purifying respirator which incorporates a canister that may or may not have a particulate filter. 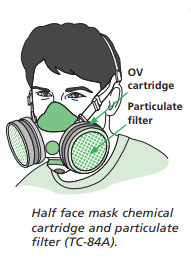 There may be instances where the pesticide label requires use of a respirator fitted with both types of purifying elements. For example, a handler may be applying a particular pesticide that is a liquid; but EPA has determined that the phase of that pesticide in the breathing zone during use is both a mist (i.e., liquid droplets suspended in the air) and a vapor. This would be a case where the pesticide label would specify the use of a combination particulate filter – chemical cartridge.