Application conditions are seldom perfect. In every situation, the applicator must be aware of the current and probable future weather conditions in order to make the best application decisions to prevent drift.

Increasing temperature affects both vapor drift and droplet drift. Many pesticides evaporate at higher temperatures than water. On a hot dry day, this means that when the spray leaves the application equipment, the water may begin to evaporate from the spray droplet. This causes the droplet to become smaller and fall more slowly. The slower it falls, the greater the opportunity for more water to evaporate. At some point, a droplet becomes small enough to be carried from the application site in even a gentle wind. Although the droplet is smaller from the loss of water, it may still contain the same amount of pesticide as the original droplet. Some labels will specify the temperature and/or humidity requirement for using the product. An example would be “do not apply this product when temperatures exceed 85 degrees F or humidity is below 20%.” When making applications in hot dry conditions, consider adjusting application equipment to produce a larger droplet and reduce the height of the nozzles to the lowest recommended distance.

Under normal conditions during daylight hours, the warmest air is near the earth’s surface, and the temperature decreases with altitude. The sun warms the ground and crop canopy. This in turn warms the air above it. The warm air then rises and is replaced with cooler air from aloft causing a mixing action of the atmosphere. Winds that are generated often blow from a fairly consistent direction.

During a temperature inversion, this situation is reversed. From dusk to early morning, the earth’s surface can lose heat causing air near the surface to be cooler than the air above it. Because cool air sinks, the result is a stagnant layer of air that does not mix with air above it. Indications of temperature inversions include smoke that rises to a certain height and then moves sideways, dust hanging in the air behind a vehicle, fog hanging in low areas, or calm conditions with no winds. 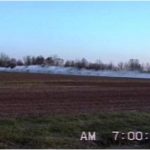 Winds during an inversion are often light, variable in direction, and very often influenced by topography. If you have a sensitive area near the application site, you have no control over which direction the wind may carry the droplets. In some parts of the country, significant temperature inversions are nearly an everyday occurrence.

When there is no wind, be alert to the possibility of an inversion. Do not spray within or above (aerial application) an inversion.