During application, the pesticide spray mixture is broken into spray particles or droplets of various sizes.  Managing the size of spray droplets is critical in managing spray drift.

Droplet sizes are measured in microns.  A micron is 1/1000 of a millimeter or about 1/25,000 of an inch. For perspective, human hair is about 100 microns in diameter. Spray droplets smaller than 150 microns tend to be the most prone to drift. These small droplets fall more slowly than large droplets. They do not have enough weight to overcome air resistance and are likely to float in wind currents.

When the size of spray droplets is reduced, their numbers increase and the potential for drift also increases. Reducing droplet diameter in half multiplies the number of droplets by eight. The characteristics of the nozzle tip (type, fan angle, orifice size, etc.) and spray pressure have the greatest influence on droplet size.

An important consideration for reducing drift is to use nozzles that produce higher VMDs (for example, greater than 300 microns). However, drift potential depends not only on the VMD, but on the total spectrum of droplet sizes. For information on the droplet-size spectrum, also look for the DV0.1 and DV0.9 values. The larger the DV0.1 value, the smaller the potential for drift. The larger the DV0.9 value, the fewer the number of droplets available to provide adequate coverage.

A DV0.9 value indicates that 90% of the volume of spray is in droplets smaller (or 10% larger) than this value. If the DV0.9 is large (for example 800 microns), too much of the volume of spray may be taken up in a few large droplets.  Spray coverage and efficacy may be reduced because there may not be enough droplets to adequately cover all treated surfaces in some applications.

A DV0.5 value means that half of the volume of spray is in droplets higher than this value and half is smaller (DV0.5=VMD).

The American Society of Agricultural and Biological Engineers (ASABE) developed a droplet size classification system (ASABE S-572.1) that ranges from extremely fine to ultra coarse based upon DV values measured in microns. To reduce confusion, refer to the ASABE S-572.1 droplet category and not the “micron” size when selecting nozzles. The recommended droplet size category to use with a particular pesticide may be listed on the product label. An example label statement would be: “Apply with 10 or more gallons per acre using a nozzle producing a coarse droplet.”

Nozzle selection and pressure can then be based on the nozzle manufacturer’s droplet size category charts. Typically, low-drift nozzles will produce spray droplets in the medium to the extremely coarse range, while reducing the number of fine droplets likely to drift. 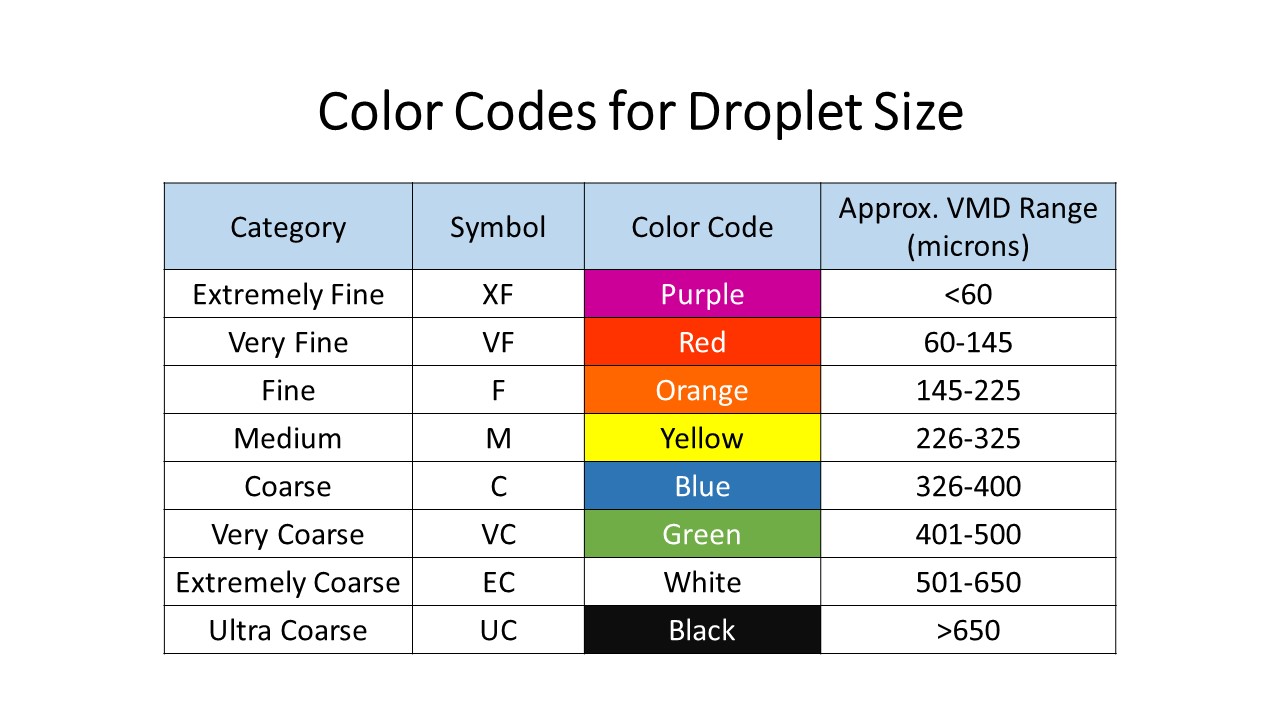