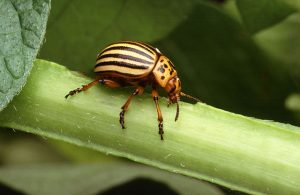 Insecticides are organized into classes—organophosphates, carbamates, pyrethroids, neonicotinoids, etc.— that share a common chemical structure and mode of action (MOA). MOA is the specific process by which an insecticide kills an insect, or inhibits its growth. The target site of action is the exact location of inhibition, such as interfering with the activity of an enzyme within a metabolic pathway. MOA and target site of action are often used interchangeably in practice and are combined as MOA in this learning module.

Genetics and intensive application of insecticides are two factors of several responsible for the development of insecticide resistance. Insects with genes that confer resistance to a particular insecticide or class of insecticides survive treatment and are thereby “selected” to pass on this resistance to later generations. For a complete description of the selection process, see Understanding Resistance. Among all the different categories of pests, insects are known to exhibit resistance at alarming rates. Worldwide, more than 500 species of insects and related arthropods are resistant to insecticides. To search a registry of resistant insect pests, log onto the Arthropod Pesticide Resistance Database.

In contrast to resistance, insecticide tolerance is a natural tendency and is not a result of selection pressure. Mature caterpillars are more tolerant to many insecticides than younger ones of the same species due to differences in body size, exoskeleton thickness, and the ability to metabolize a poison. These differences are identified as tolerance or natural resistance rather than true insecticide resistance.

Insecticide resistance is described in detail by breaking the topic into the sections listed below. All content has been expertly reviewed by Dr. Caydee Savinelli, Syngenta, and Steve Toth, Center for Integrated Pest Management. Both are technical/science experts within IRAC.