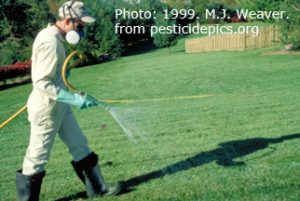 Herbicide resistance is the inherited ability of a biotype of a weed to survive an herbicide application to which the original population was susceptible. A biotype is a group of plants within a species that has biological traits (such as resistance to a particular herbicide) not common to the population as a whole. In simple terms, resistance refers to a situation where a given herbicide, applied at the recommended rate and time, once controlled a particular weed population but, after repeated use, that herbicide no longer controls that population. That population is said to be resistant (or resistance has developed in that population).

For a complete explanation of how a population of weeds becomes resistant to an herbicide see Understanding Resistance. Wherever herbicides are used on a consistent basis, it is important to recognize the difference between weed population shifts, and resistance. Both weed population shifts and resistance are undesirable and make weed management difficult. To explore important terminology visit the Herbicide Resistance Terms to Know page.  For information on the number of resistant weed species and their worldwide distribution see weedscience.org.

Herbicide resistance is described in detail by breaking the topic into the sections listed below. All content has been expertly reviewed by Drs. Carol Somody and Les Glasgow, Syngenta.