Particle or droplet drift occurs during or soon after the application. ‘Particle’ means the active ingredient of a pesticide as a liquid (spray droplet), granule, pellet, dust, fumigant, etc. Small droplets are more likely to drift than larger droplets. A number of factors influence droplet size, including formulation, nozzle type, sprayer pressure, and weather conditions. 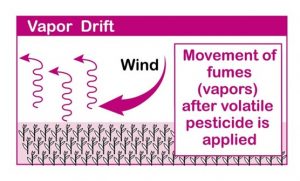 The active ingredient of some pesticides can evaporate or volatilize during application, or for several hours afterward. When vapor containing the pesticide active ingredient moves off the application site, it may cause plant damage, contamination, or human health risks. Volatility is based on the vapor pressure of the pesticide, and, in general, higher air temperatures increase the probability of vapor drift. Read the pesticide label for specific procedures and warnings, such as maximum temperatures or soil incorporation requirements, to reduce the potential for vapor drift. An example of a label warning statement would be: “avoid application when temperatures may exceed 85° F during or 24 hours following the application.” 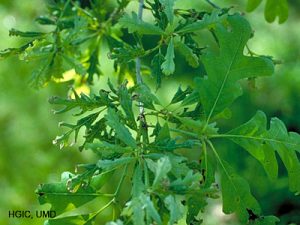 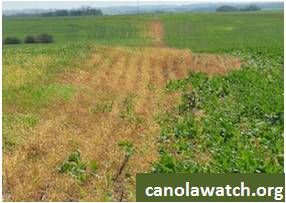 Particle, droplet, and vapor drift can cause aesthetic as well as economic injury. The oak, on the left, will grow past the damage.  The drift-damaged canola, on the right, will not.